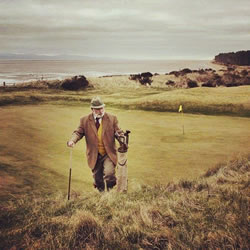 TAIN - A GOLFING HISTORY OF PEOPLE, PLACES AND PAST TIMES by Tony Watson

Huge thanks to Tony for all his hard work and the massively generous gesture of donating all the proceeds to Tain G C.
The cost of the book is minimum £10 and is available at the club. It will be available online soon hopefully but in the meantime if anyone would like a copy sent to them just email Magi info@tain-golfclub.co.uk  and we'll happily post one to you (extra £2 charge for postage & packing).

Golf was most certainly played on an informal basis over the  abundant links areas of the Inner Moray Firth some hundreds of years before the establishment of the present golf club. Unfortunately firm documented evidence relating to golf in Tain prior to the mid 19thC is virtually non-existent. In all probability those few players were the sons of local landowners with suitable grass and park lands, whose fathers had sent them south to pursue an education and who were then introduced to golf along with no doubt, other less health benefiting activities. It was the introduction and the substantially reduced cost of the gutty ball that made playing the game more accessible to a wider audience and which rendered the primitive six or so holes that were in existence on the links of Tain c1870 unable to meet the new demand.

So it was then that in 1889, a few local devotees of the game had the good sense to invite Old Tom Morris to give the once-over on a piece of land that they proposed to acquire on lease from a local land owner. It was reckoned by Tom Morris that only fifteen holes be constructed and the course opened in this fashion in 1890 but a lack of resources (unfortunately an often recurring theme for the Tain Club over the next century) meant that this was soon reduced to twelve holes and it was not until the 1894 season that sufficient finances were in place to effect alterations and improvements to the original holes together with the securement of additional land  from another land owner, enabling the course to  became a recognisable  eighteen hole  test of golf. And so the St. Duthus Golf Club, named after the patron saint of the town was formed - it was not really until 1911 and the establishment of the present clubhouse, that the name change of the club gradually evolved.

Over the decades, as equipment and especially the golf ball improved immeasurably, many of the original holes became too short for the “modern game” and further adjustments were made to the course until today, few holes can be said to be original. Those that have stood the test of time are the present ninth (playing to the original green), tenth, fourteenth and fifteenth, although these were not their original designations and several others retain parts of the original Tom Morris design. What has not changed is either the original vision of Tom Morris and the founding members of the club or the challenging design of the course which unlike some “true links” courses offers a far greater variety of play than simply  hole after hole in the same direction with no temporary respite  from at times potentially adverse weather conditions.

In 1895, a devotee of the club wrote in a golf magazine an article on the club and finished his homily by stating  “the hon. secretary will be pleased to give any further information and the stranger may rest assured that the members of St. Duthus Club will be always ready to extend to him a hearty Highland welcome” - the club and its present members hope that, almost 125 years later, we continue to live up to these ideals.