A legend in his lifetime, Old Tom Morris was the complete golfer. Born at St. Andrews, he was apprenticed to Allan Robertson, the finest golfer of his day. From him Tom learned to make those early feathery balls and to hand craft clubs. 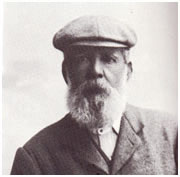 Quick to adopt the gutty ball, Old Tom soon became pre-eminent as a player. Blessed with a rhythmic and drowsy swing, he won the Open at Prestwick four times between 1861 and 1867 before giving best to his son, Young Tom, who equalled his feat by the time he was 24.

In the last 15 years of the 19th century, when the passion for the game was exploding, Old Tom more then played his part. In all he had a hand in the design of 69 courses, of which 52 were in Scotland. His charges were ever modest at £1 per day plus travelling expenses.

He learned this aspect of his trade at Carnoustie under the tutelage of Allan Robertson.  Carnoustie's only surviving Morris hole is the long 6th, the ruin of so many cards in the 1999 Open. Yet the courses to which Tom contributed read like a roll of honour. Among them are Royal Dornoch, Machrihanish,Muirfield, Nairn, Prestwick, St. Andrews New and in Northern Ireland, Royal County Down and Royal Portrush. What a master he must have been to his apprentice Donald Ross who, at 27, emigrated to the United States and, in the early 1900s, was establishing himself as their most influential golf course designer after his success with Inverness and Pinehurst No 2.

Here at Tain in 1890, Old Tom counselled just 15 holes. Although this was soon reduced to 12, four years on the full 18 was on offer. Tain's fortune is that so many of Tom's original holes survive, either wholly or in part and for this one must be grateful to Dornoch's John Sutherland, Secretary of that club for fifty eight years and whose advice on course design and improvements was much in demand locally. When he came to remodel the course, he knew instinctively where to leave well alone. The Tain holes which primarily still show the original design of Tom Morris include -  going out, the 2nd, 3rd, 4th, 6th, and 9th and coming home, the 10th, 14th, and 15th.

Not surprisingly, therefore, it is Tain, fondly referred to as Old Tom Morris's Northern Jewel, which treasures the Grand Old Man of Golf as its founding genius.